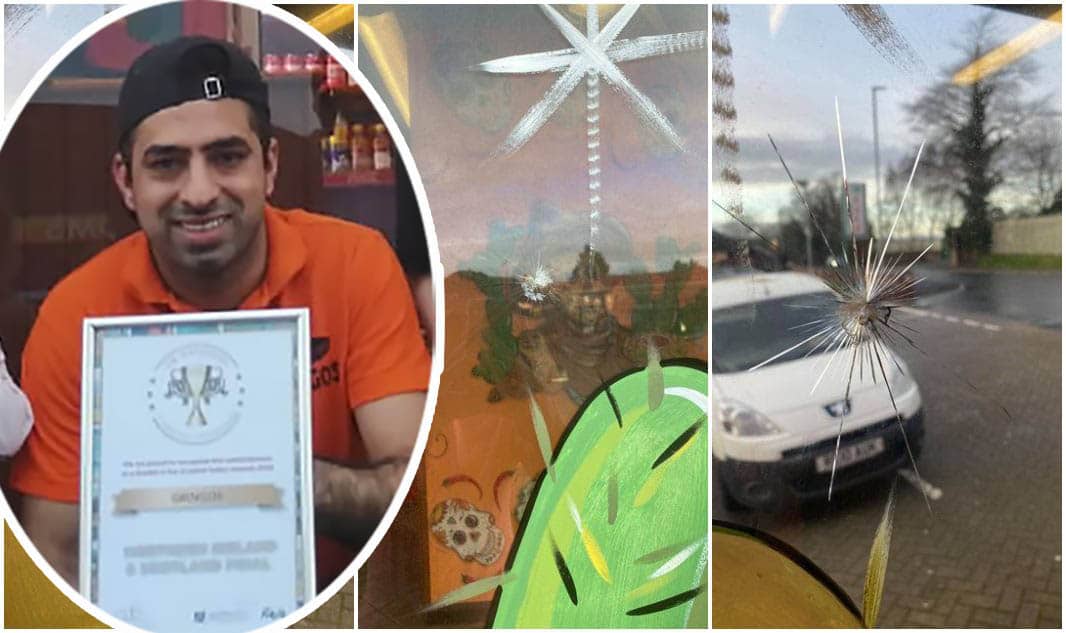 The owner of a fast food takeaway in Armagh has been left devastated after vandals smashed his shop windows late on Thursday night.

Sohaib Ahmad – popularly known as Ali – of Gringos Mexican takeaway in Armagh has been left reeling just a week before Christmas.

The deliberate attack comes just 24 hours after he suffered racial abuse down the phone from anonymous callers to his Killylea Road outlet.

Gringos has operated in the city for the best part of 11 years and this is the first time Ali says he has experienced anything like this.

“Maybe people don’t like me being here anymore,” a heartbroken Ali told Armagh I. “I just don’t have any clue why this has happened.”

Explaining the sinister series of events over the two nights, he said: “Last night three of the windows were smashed. The workers in the shop recalled hearing a loud bang and when they went outside to see what had happened there was nobody there.

“Maybe people pulled up in a car, threw something at the window, and drove away.

“But the day before – on Wednesday night – I got a call from a withheld number and the people on the other end of the phone started racially abusing me but I just ignored it as I was working. It was just racism down the phone, calling me all sorts, like dirty P*** and things like that.

“It was half an hour of constant calling to the shop phone with their withheld number.

“But I have been a bit scared since yesterday.”

The damage will set Ali and his business back hundreds of pounds just days before Christmas and ahead of a long January where much of the city will be in lockdown.

“It’s all the windows which will need replaced. It’s not as if it’s just small pieces to replace, it’s the entirety of the shop front,” he said.

“With Christmas around the corner, it’s horrible. I have been serving all the community here for a long time. I am just lost for words.”

The incident which happened around 10pm, occurred around the time an Indian takeaway was targeted in a similar fashion.

Police have issued an appeal for information after Shapla, on Lower English Street had its windows shot at.

Officers believe a pellet gun was used in this attack.

If you witnessed anything, have any dashcam footage, were in the area at the time, or heard anything, then please contact police on 101 and quote 1943 of 17/12/20.