Bessbrook girl Ruth will be off to Houston, Texas 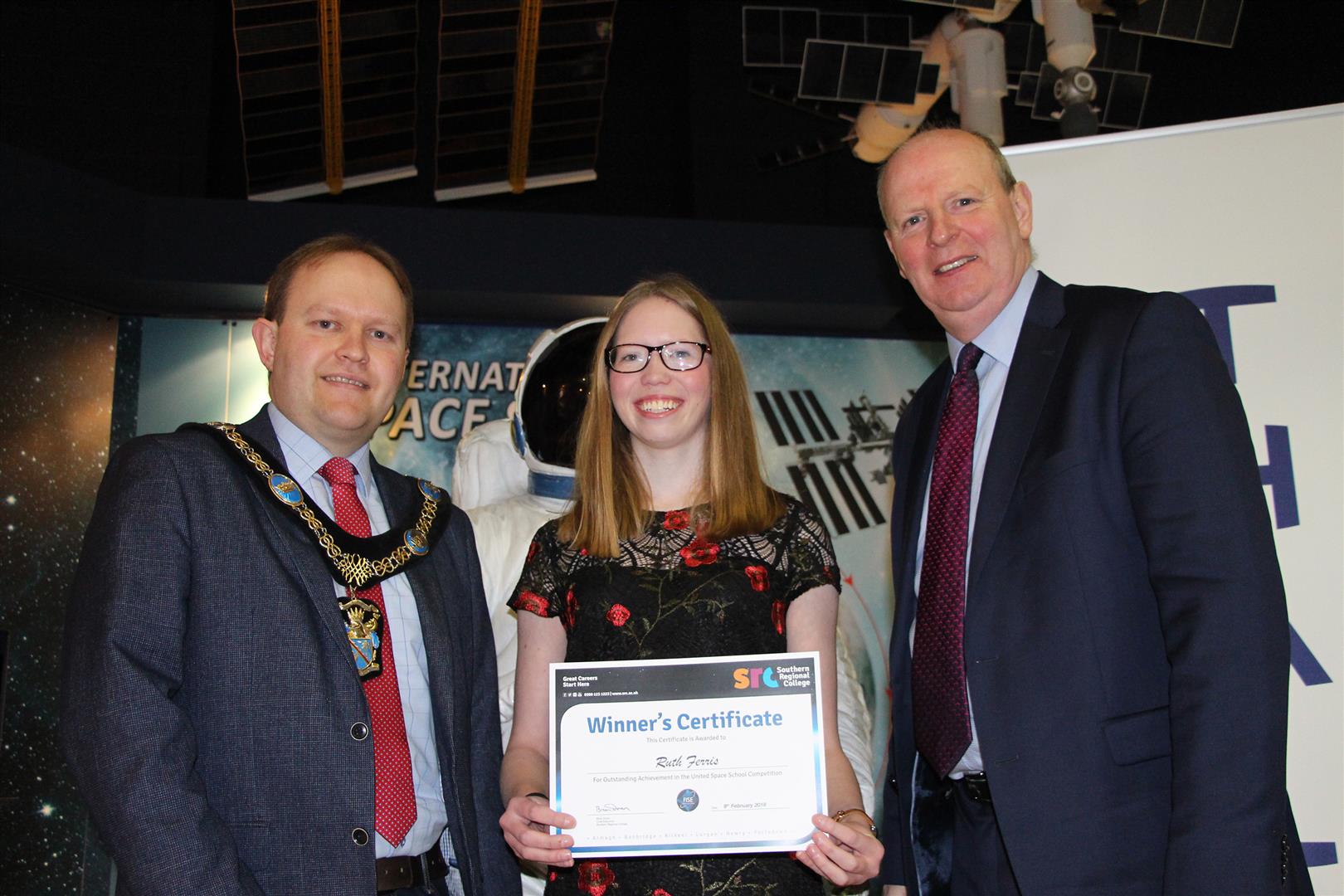 A student at Southern Regional College’s Armagh Campus is set to experience a once in a lifetime opportunity after winning a two-week placement to the United Space School in Houston, Texas.

Ruth Ferris, who lives in Bessbrook and is a former student at Newtownhamilton High School, entered the competition alongside fellow students from the School of Applied Science and Academic Studies at Southern Regional College (SRC) by submitting a 500-word essay and undergoing a challenging interview process.

Nine students were shortlisted and interviewed by SRC Management staff.   This shortlist was then whittled down to three finalists with Ruth Ferris announced as winner at a celebration event held in the Armagh Planetarium this week.

The two runner-up students were also announced: Ruairi Daly from Keady, a former student at St. Patrick’s High School and Nicole Gates from Moy, a former student at The Royal School, Dungannon.  All of the finalists are currently completing their A Levels at Southern Regional College – Armagh Campus.

Speaking at Friday’s event was Dougie Davidson from Thales and Denver Humphrey from Arralis.

Brian Doran, Chief Executive at Southern Regional College said: “We are very grateful to our sponsors Fusion Space Technologies, Queen’s University Belfast and Thales for their support in ensuring that Southern Regional College continues to provide international and unique career opportunities for our students.  Prestigious placement opportunities like these provide a great launch pad for their future careers.”

Southern Regional College is the only academic institution in Northern Ireland who provides an opportunity for one of its students to attend the prestigious United Space School in Houston, Texas.

The United Space School is an interdisciplinary programme that annually brings together up to 50 students from 25 different nations to study at the University of Clear Lake in Houston.  Under the mentorship of engineers, scientists and leaders in the aerospace industry, they come together to design their own ‘Mission to Mars’.  Students also participate in a variety of space related activities at the Johnson Space Centre, the University of Houston Clear Lake, Rice University, Space Centre -Houston, the George Observatory at Brazos Bend State Park and the Houston Museum of Natural Science.

The students are hosted by families residing in Clear Lake who work within the aerospace community.

This competition, now in its 4th year at Southern Regional College, was developed in association with Sinead O’Sullivan – a former A Level student at SRC who progressed to Queen’s University Belfast to study Aeronautical Engineering after she participated in the programme herself over 13 years ago.

The two week placements for the winning student is sponsored by Thales and Queen’s University Belfast.