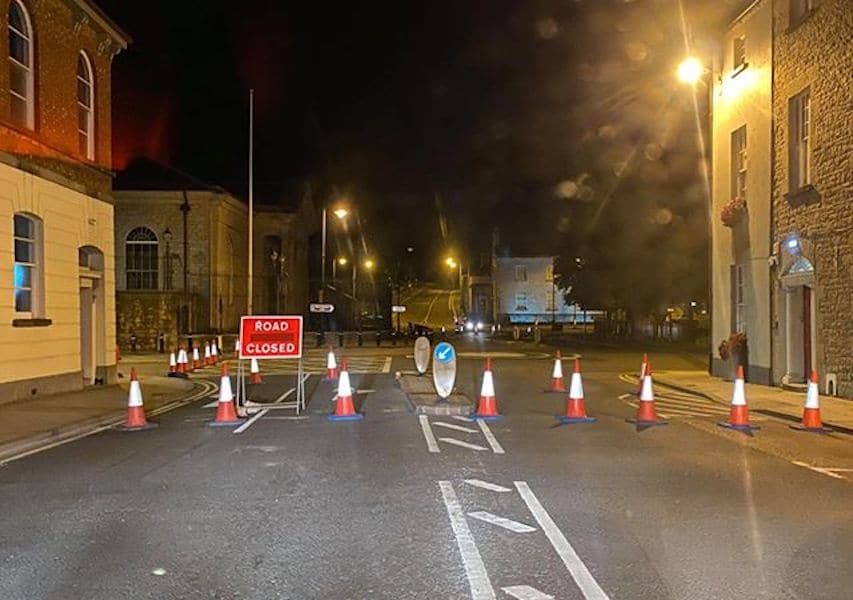 “There’s no way out, it’s like something from a horror movie,” one motorist bemoaned.

It’s fair to say the current regime of roadworks in Armagh city hasn’t gone down particularly well, especially for residents.

The Department for Infrastructure (DfI) are currently carrying out work between two of the city’s main roundabouts – the Moy Road and College Street, at the courthouse.

The work will continue right through until August 15, with improvements also being carried out on the roundabouts themselves.

While that may be the crux of the issue, DfI is also carrying out work at Callanbridge too. There is also temporary traffic control on the Cathedral Road as Firmus Energy dig up the road for pipes there – a melting pot for traffic chaos in and around the city centre. Firmus are also carrying out work on the Cathedral Road

Last night, police were even forced to take to social media to remind people that there is still a one-way system on Banbrook Hill – next to the Moy Road roundabout.

“Several motorists have breached the one way system and have been advised by police,” they said. “Please stay safe and adhere to the diversion signs in place”.

One motorist said that traffic being diverted up over Banbrook and onto ‘O’Kane’s roundabout’ with every exit blocked off “was a personal favourite”.

We asked readers for their thoughts on the matter – for a more rounded view from the many who encountered the dreaded ‘Road Closed’ signage.

“Last night was a disaster, the workers were directing traffic the wrong way over Banbrook, and diversions brought you to another road closed sign,” said one person.

That sentiment was backed up by dozens of others.

The Lonsdale Road / Railway Street closure is in place between the hours of 7pm and 7am. The entire 600-metre stretch is undergoing resurfacing and the work includes the two roundabouts at either end.

And on Sunday, the road will be closed during the entire day.

“Traffic through Armagh at anytime is almost chaotic; last night was a total shambles. I was directed around in circles from the Loughgall Road,” said another road user.

One person said she was being directed home from O’Kane’s – a two-minute drive away – through Benburb.

“I just laughed at him,” she said.

Many others said it was time for a link road around the city. Those calls grow louder and louder as the years roll on…