Planetarium to say it with flowers to mark 50th anniversary relaunch 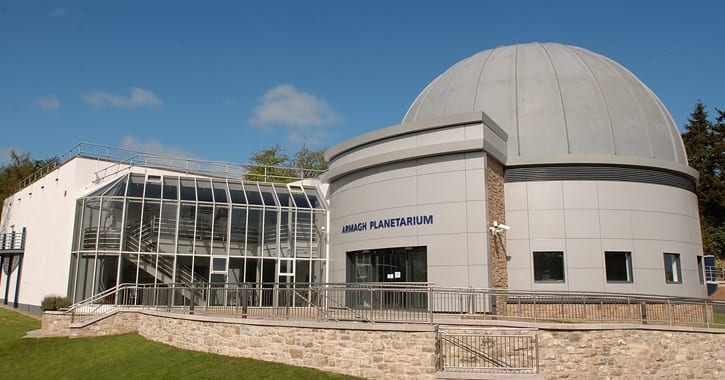 Armagh Planetarium is to get a relaunch, rebrand and logo to mark its 50th anniversary year.

The venue – which opened in 1968 at its site at College Hill – is the only Planetarium in Northern Ireland.

The first director was the late Sir Patrick Moore, who presented the record-breaking Sky at Night television series for many decades, and for whom Armagh held a special place in his heart.

It was his vision that a Planetarium open in the city and it has remained to the forefront of the city’s tourism offering for many years, giving both entertainment and educational value.

It has been refurbished and restored and added to many times over the years, including an Astropark and Eartharium.

And Armagh Planetarium has certainly stood the test of time.

Now it is about to get a relaunch and Armagh City, Banbridge and Craigavon Borough Council will be helping to mark the occasion.

The council has been asked to plant a celebratory flower bed during the last week in April.

It is during that week that the relaunch and rebranding – complete with new logo – has been scheduled.

The logo features an illuminated ’50’ against a dark blue background, indicating the night sky, with part of the ‘0’ covered to give the impression of a lunar stage.

The flowerbed will be placed at College Hill outside the Planetarium with the figures planted in gold coloured flowers to match the new branding.

The relaunch will also see new promotional material and the logo displayed from totem poles across Armagh City.