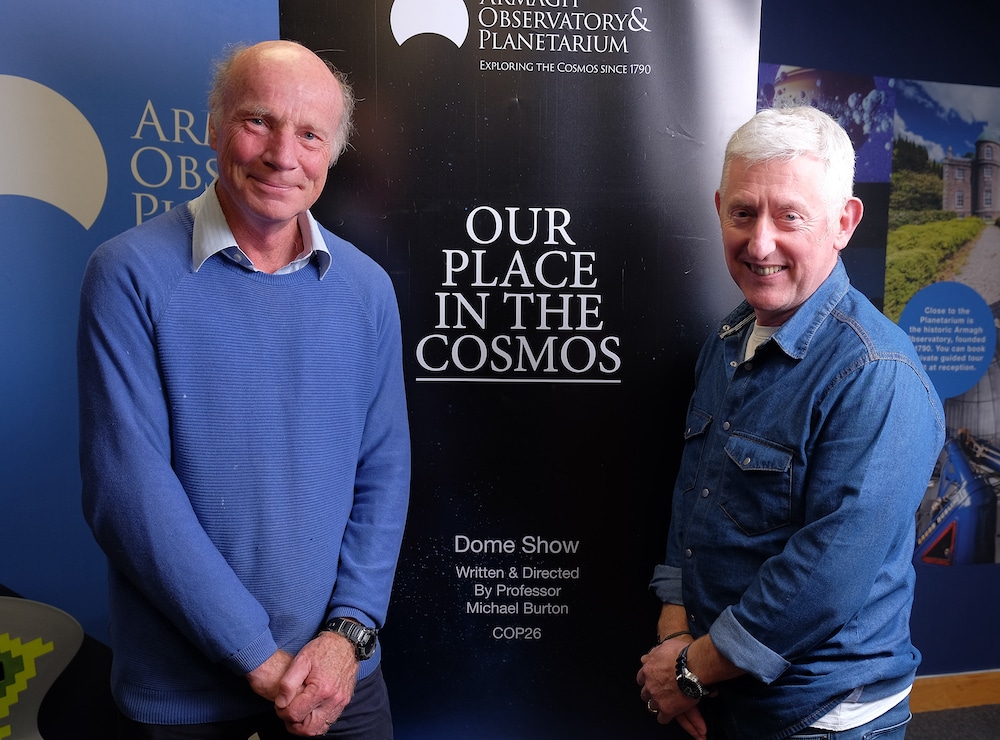 Globally renowned astronomical research centre, Armagh Observatory and Planetarium’s full dome show, ‘Our Place in the Cosmos’ was screened at the Fulldome UK 2022 (FDUK 2022) festival in Plymouth earlier this month.

One of 35 entries selected from amongst 100 showcased at the festival, the show was written and directed by Armagh Observatory and Planetarium’s Director, Professor Michael Burton. It explores the uniquely fragile space that Earth occupies in our Galaxy, as the only known habitat that can sustain life.

The piece examines Earth’s relationship with violent activity like supernovae, and in particular, its need to be simultaneously protected from and stimulated by these events, which are needed to support life on our planet.

In Our Place in the Cosmos, Earth is compared to its nearest planetary neighbours, Venus and Mars, which were also initially habitable. Over 4 billion years ago, these three planets looked similar, yet their subsequent evolution has followed very different paths.

The show illustrates these contrasts and delves beneath the planets’ atmospheres. It also looks at what would happen to Earth’s continents should the sea level rise and examines how we can monitor planetary health from space, to help protect our fragile home from further damage.

Professor Michael Burton, Director at Armagh Observatory and Planetarium, says: “We were delighted that Our Place in the Cosmos was shortlisted for screening at FDUK 2022 and thank Fulldome UK for showcasing this important piece.

“The show was created to educate people about our fragile planet, to place it in context and to communicate the importance of protecting and preserving it as we negotiate climate change.

“As the longest continuously operating astronomical research institute in the United Kingdom and Ireland, we hold a vast amount of knowledge about planet Earth and we’re passionate about using that information to educate and to inspire positive action.”

The UK’s premiere celebration of all things fulldome, FDUK 2022 provided an opportunity for film makers and performance artists to share their skills and experience with other members of the fulldome community and to present their work to new audiences.

The festival featured 35 fulldome film screenings, with many being shown in the UK for the first time. Other highlights included more than a dozen talks, presentations and workshops.

Paddy Craig, HND Music Coordinator at Southern Regional College said: “We are extremely proud of our students’ involvement in the ‘Our Place in the Cosmos’ Dome show.

“We had the unique opportunity to work alongside our friends in Armagh Observatory and Planetarium to create a bespoke show.

“Our HND students recorded the narration, created the sound design and composed all the music.  They loved exploring the universe of sounds that appeared in the completed soundtrack. What a brilliant project!!”

To find out more information about the Armagh Observatory and Planetarium, visit: www.armagh.space