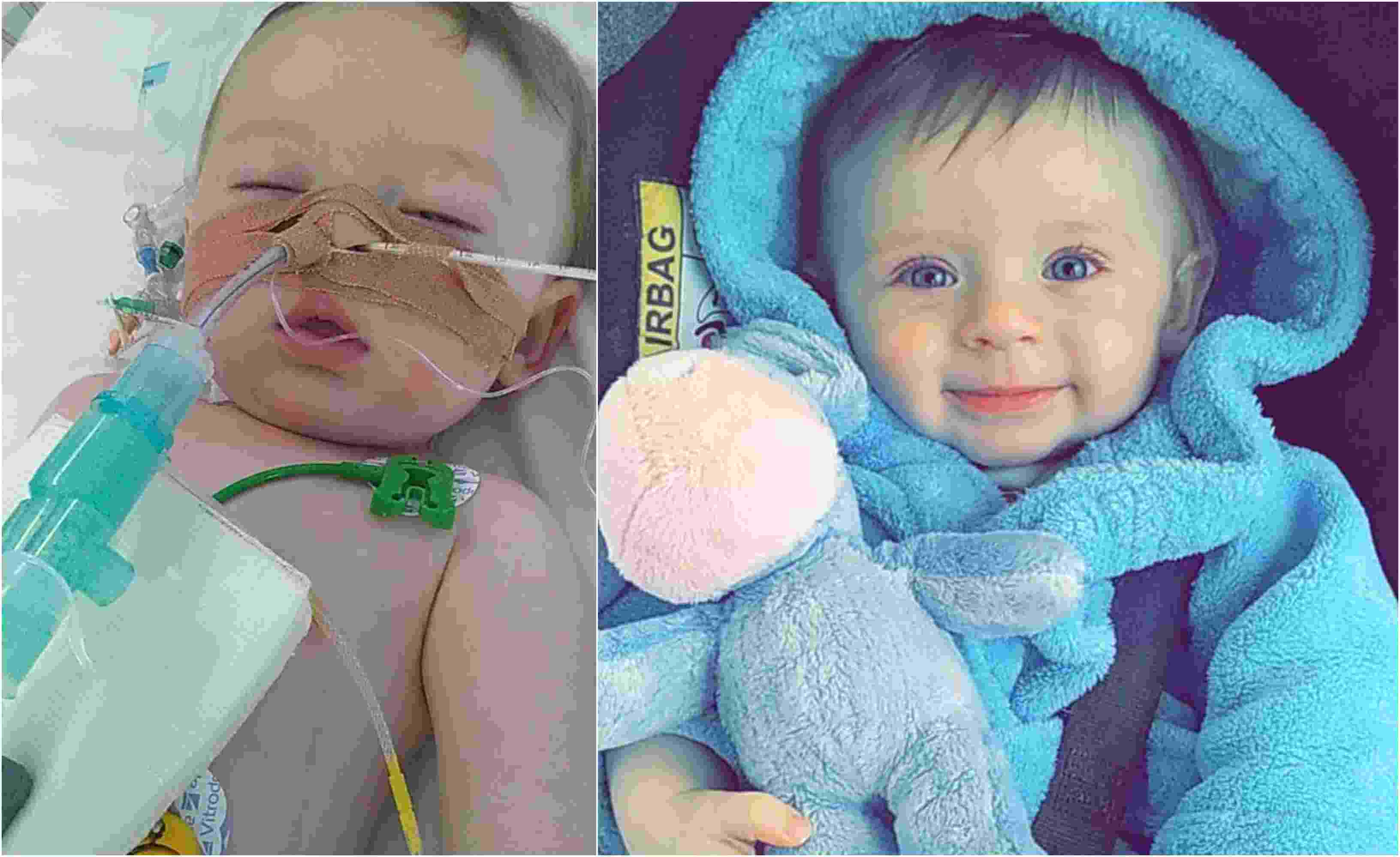 An Armagh mother has praised a nurse at Craigavon Area Hospital whom she says saved the life of her darling son and adds: “I’m so grateful to have my baby home.”

Colleen McGirr, meanwhile, has also urged other people to trust their instincts if they suspect their child is ill and demand attention.

The young mum says she is grateful to the medical staff and consultants who have tended to baby Tyler, who was in a coma last week after being rushed to hospital.

She has praised the staff but hit out that the powers-that-be who have allowed the “NHS to become so bad”, with not enough resources and “the limited number of staff stretched to their limits”.

Colleen told Armagh I : “Tyler is seven months old. He is now home after two weeks in hospital. Three weeks before that he was in hospital for six days.”

The photographs show Tyler in a coma last week and the other is how the little mite is today.

For Colleen and partner Dave it has been a frantic and worrying time and there are more tests to come for the little boy.

She said: “Since Tyler was born I always knew there was something not right. He was always sick and suffered terribly with bowel problems with trips to hospital doctors every single week, with them just throwing medication at us to give him and doctors asking ‘is he your first?’, like I was paranoid.

“With constant colds and coughs and in pain every day, he has spent a lot of his life in hospital. Three weeks ago he was in hospital on oxygen. He was treated for sepsis and pneumonia and then he came around with antibiotics and we went home.

“Then last week we went to hospital again and sat waiting for five hours while I watched my baby struggle to breathe and in pain with his bowels.

“We finally got around on to a side room and they then told me he was fine, just needs to take a bottle and he can go home again. I couldn’t believe it – yet again they were sending us home and him so sick. So I sat trying to get a bottle into him and then I said to myself I’m not having this.”

Colleen said she demanded to speak to “the top person” at the hospital.

She said Tyler was “getting worse by the minute”. He was put on high flow oxygen.

Colleen continued: “I watched my baby dying in my arms and they then came and asked me at 5am did I want a priest to bless him and that he had to be sedated and put in a coma and sent to the Royal in an ambulance.

“This has been a terrible experience for us as a family and my poor T, but he spent a long time in intensive care and down on the ward and got a diagnosis of his bowel problem and a diagnosis for his breathing problem, with more tests to follow and will be followed up every month in the Royal.

“The moral of our story is a mother or father’s instinct is better than any doctor’s and if you have to kick and scream at doctors please do as Tyler wouldn’t be here today otherwise.

“One special sister of the ward in Craigavon saved Tyler’s life that night as she knew he was dying in my arms and got him sorted. Then they had to run really fast to theatre with him and when we got there the machine was keeping Tyler alive. He was taking no breaths by himself.

“All the doctors and consultants who did look after him were amazing and nurse Faith. Please don’t be afraid to stand up and say you’re not happy the NHS has come to this.

“I hate to think what would have happened if I hadn’t spoken up and had taken Tyler home.”

Colleen said Tyler has been diagnosed now with lazy bowel syndrome, severe asthma and more tests are also to be carried out.

He is currently at home with medication for his bowels and asthma and is due to see a gastroenterologist too.

Said Colleen: “Before this we were left with him in pain every day. Nurse Faith saved his life and we are so glad to have him home.”