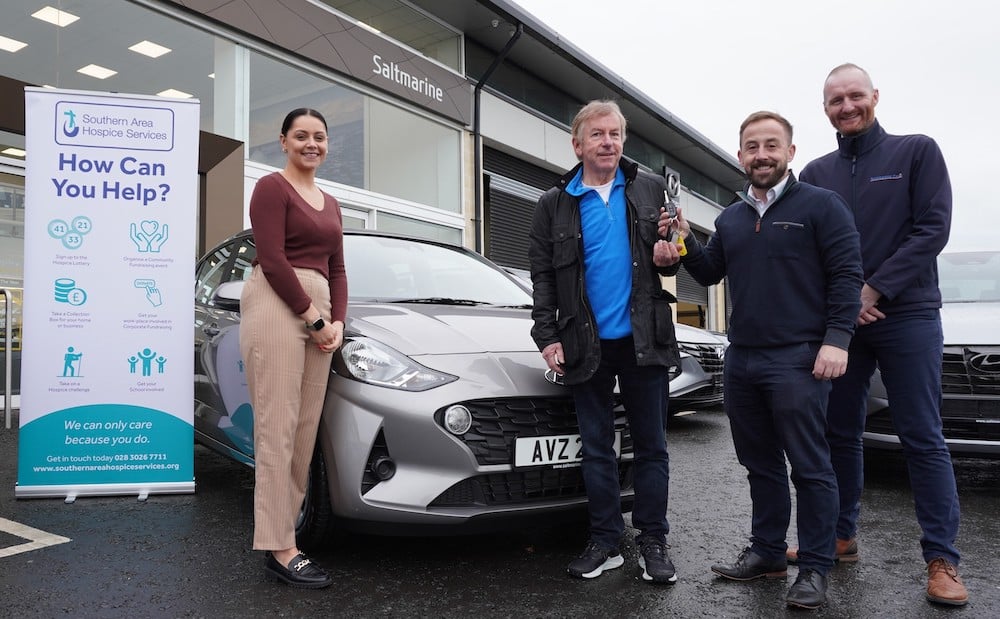 An Armagh was the lucky winner of Southern Area Hospice Services ‘Win a Car’ Competition which was supported by Saltmarine Cars and NFU Mutual.

The draw took place on Saturday, November 5 at Buttercrane Shopping Centre Newry with the Chairperson of Newry, Mourne and Down District Council, Councillor Michael Savage in attendance to verify the draw.

Ian Lyttle was absolutely thrilled to receive the phone call on Saturday evening announcing him as the winner of the brand-new Hyundai i10.

Ian called to Saltmarine Cars on Monday, November 14 to collect his new car. As well as a new car Ian also won one year’s free insurance.

Speaking about his win, Ian said: “The fact is, my mum has been selling tickets on behalf of the Hospice for over 20 years and I have been buying them for just as long. It’s a delightful prize, and a great competition in support of one of the very best causes. Looking forward to next year’s draw already!”

Speaking of their support of the Car Competition, Graeme Blevins, Sales Manager at Saltmarine Cars, said: “It has been an absolute pleasure supporting the car raffle this year. My family have had personal experience with the Southern Area Hospice. Nine years ago, the Hospice provided end of life care to my dad, and we have never forgotten how caring, genuine, and hardworking the staff are. Saltmarine are proud to support the Hospice and delighted to hear they raised such fantastic funds
through this competition.”

Southern Area Hospice Services has continued to provide the highest level of Hospice care to patients and their families, and it is only with people supporting campaigns such as their car competition that they can do this. All the money raised through the car competition will enable them to continue their work providing care and support to local people.

Southern Area Hospice Services would like to extend thanks to Saltmarine Cars and NFU Mutual for their continued support. They also wish to thank Buttercrane Shopping Centre and Oaks Centre, Dungannon for their help and support with the car competition, as well as many other venues and outlets which permitted them to sell tickets. Thanks, are also extended to MacMac Media who created fantastic video content throughout the campaign and to the Chairperson of Newry, Mourne
and Down District Council, Councillor Michael Savage.

Lastly but by no means least, James McCaffrey SAHS said: “On this campaign, we rely so heavily on the fantastic goodwill of our volunteers who sell tickets in each of the venues, without whom this competition would simply not be possible. Thank you to all our volunteers, and to all those who helped make this a success for Hospice.”

Also, a final word of appreciation and thanks to every single person who purchased an entry and helped to raise vital funds for Southern Area Hospice Services.

For more information on the work of Southern Area Hospice Services see www.southernareahospiceservices.org