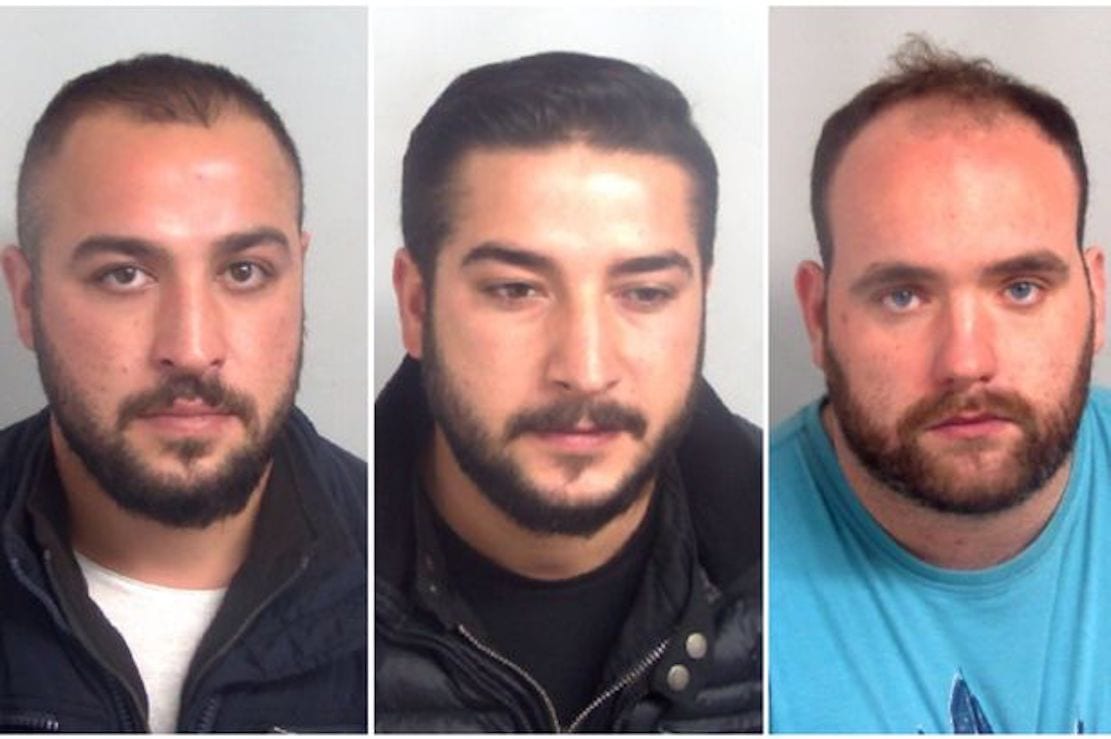 Some of the alcohol stored at the unit.

An Armagh city man has been given a suspended jail sentence for his part in a £3.6 million alcohol scam.

Twenty-six-year-old Conor McCreesh (pictured far right), of Dobbin Hill Road, pleaded guilty to the fraudulent evasion of excise duty and possession of an article for use in fraud, namely a false CMR document.

He was one of three to appear in court in connection with the fraud.

Two London-based brothers – who evaded £3.6 million in tax by distributing alcohol smuggled into the UK – were jailed for a total of more than 12 years.

Thirty-two-year-old Tayfun Donger, and Taylan Donger, 29, both of Edmonton, masterminded the scam.

But they were caught red-handed unloading smuggled beer at a warehouse in Epping, Essex, on November 10, 2016.

HM Revenue and Customs (HMRC) officers arrested the men as they removed the alcohol from an HGV that had been brought into the UK from Belgium.

It had been brought here by Armagh man Conor McCreesh.

The officers seized more than £4,000 in cash, the equivalent of 119,000 pints of beer, 6,000 bottles of wine and 830 bottles of spirits, along with the HGV, a forklift truck, pump trucks and two vans, which had been used to carry or handle non UK duty paid alcohol.

Investigations revealed that during a seven month period, they had distributed smuggled alcohol worth £3.6 million in unpaid duty and VAT into the UK.

Brett Wilkinson, Assistant Director, Fraud Investigation Service, HMRC, said: “The Donger brothers thought they had developed the perfect scheme to illegally trade in illicit alcohol, diverting millions of pounds from public finances straight into their pockets, until HMRC officers stopped them in their tracks.

“These men were stealing from the taxpayer and undercutting legitimate traders. The money they evaded was the equivalent of the starting salary for 130 new nurses in London.

“We urge any member of the public who know of anyone committing this type of crime to report it to HMRC online or call our Fraud Hotline on 0800 788 887.”

Just days before the start of the trial, Taylan Donger attempted to flee to Turkey, but was arrested by HMRC officers on September 20, at Stansted Airport and remanded in custody.

The Dongers denied evading excise duty and VAT, but were found guilty by a jury at Chelmsford Crown Court.

Tayfun Donger was given a six-and-a-half year sentence and Taylan six years.

McCreesh – who admitted his role in the fraud and possessing false documentation – was given a 15-month jail sentence, suspended for two years.