Armagh man at scene of Paris attacks; reports of 40 dead 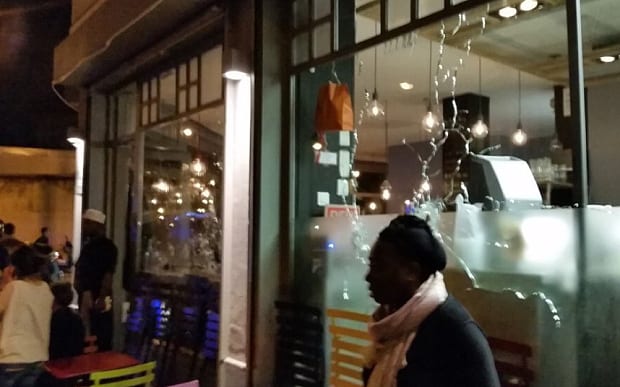 At least 40 people have been killed following several “terrorist attacks” in Paris this evening.

Armagh man Patrick Gray, originally from Daire’s Willows in the city, is on the scene and has been tweeting as events unfold.

His latest tweet reads: “Hiding in an entry near place de la republique with sone Parisians.. Being told someone still out there with gun.”

He told BBC Radio Ulster: “Police told us to run and we started running down the street. I don’t even know where I am at the moment.”

He added: “I ended up being pulled into this entry lane by these people and we were sat there for a while. The police were marching up and down all armed. All of a sudden this nice guy told us to come into his house.”

Reuters reports that US security officials believe the attacks were probably coordinated, based on initial reports. It cited an anonymous source familiar with developing intelligence assessments.

“This clearly looks like a coordinated series of attacks,” the person said.

According to the Associated Press, a police official said 11 people were killed in a Paris restaurant in the 10th arrondissement and about 35 were killed at the Bataclan theatre, where a hostage-taking is under way. Police said 100 hostages were being held.

Reports have suggested that at least 40 people have been killed with that figure expected to rise significantly.

At least two gunmen have been spotted as a theatre and restaurant were attacked.

The French president François Hollande says a state of emergency will be declared across France, adding that several dozen people have been killed in terrorist attacks around Paris.

In a statement just delivered, the president of the republic said that its borders would be closed and military units were being deployed in Paris to prevent further attacks. Hollande said a cabinet meeting was about to start to discuss the response to the attacks.

He called on France to remain united and calm.

A state of emergency gives the French authorities powers to control traffic and close down public spaces.

Hiding in an entry near place de la republique with sone Parisians.. Being told someone still out there with gun

Thanks everyone for the messages. Been taken into a kind gentleman’s house with six other people but safe

This was live during a international friendly between France and Germany at the Stade de France in the north side of Paris.

This is crazy. An explosion heard while the game was going on. Thoughts and prayers with the people of Paris. https://t.co/sVMALEMxVH