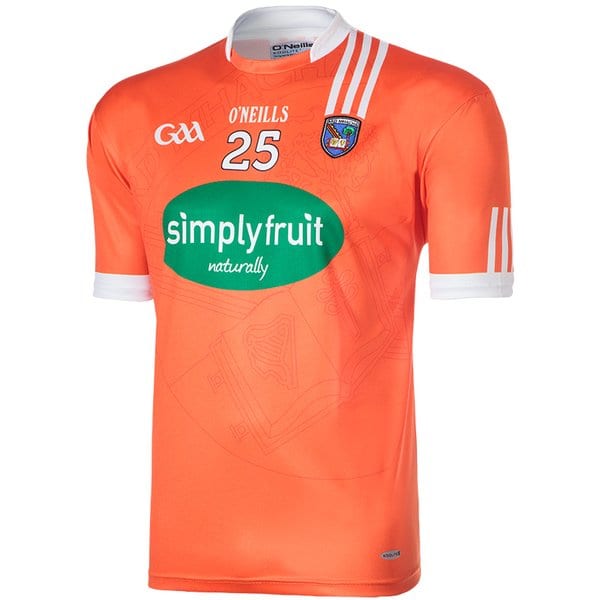 Armagh GAA has tonight unveiled its new sponsor – and the new jersey for 2016.

The official announcement was made live tonight (Thursday) by County Chairman Paul McArdle, at the Athletic Grounds in Armagh and broadcast via Linwoods Armagh TV.

The new sponsor has been named as Simply Fruit, and Paul welcomed managing director Patrick McCann, hailing him as a “true Armagh supporter”.

He said he was delighted to be the new shirt sponsor and added: “Just being associated in any capacity with this proud county is a great honour.”

The new team partner is Mac-Interiors, and managing director Paul McKenna, from Whitecross, also spoke of his delight at backing the County team. The company’s name appears on the back of the new jersey.

He said: “It’s a great honour for my company to have their name on this jersey.”

Senior players and hurlers modelled the new jersey and Armagh manager Kieran McGeeney also spoke of his hopes looking forward and thanked both companies for their support.

The jersey unveiling also coincided with the launch of a new website for Armagh GAA.

Fans were given the opportunity to buy the jersey tonight at the event.

But it goes on general sale from tomorrow (Friday), November 20.

For the past three years, the County has enjoyed the generous backing of Rainbow Communications and for that all connected with Armagh GAA have voiced their gratitude on the “fantastic partnership”.

The company has been the main shirt sponsor for the Orchard County’s Senior and Under 21 squads, as well as the hurling teams.

Armagh GAA, in a statement said: “We would like to offer our sincere thanks and appreciation for the generous backing and support they have given us. Our partnership with Rainbow Communications has allowed us to prepare our footballers and hurlers for the many challenges they would face in their respective competitions.

“We would particularly like to thank Directors Martin Hamill and Eric Carson for their enthusiasm and dedication to the partnership throughout the past three seasons. Armagh GAA will be forever appreciative of their support and would like to wish Rainbow Communications the very best for their future development and growth.”

Rainbow Communications, meanwhile, has said it was “proud” to have been the main shirt sponsor and has thanked the county officials, players and fans for their support over the past three years.

They added: “Rainbow Communications will continue to be involved with the county in the future at a variety of levels and would like to take this opportunity to wish all of the Armagh GAA teams every success in 2016.”