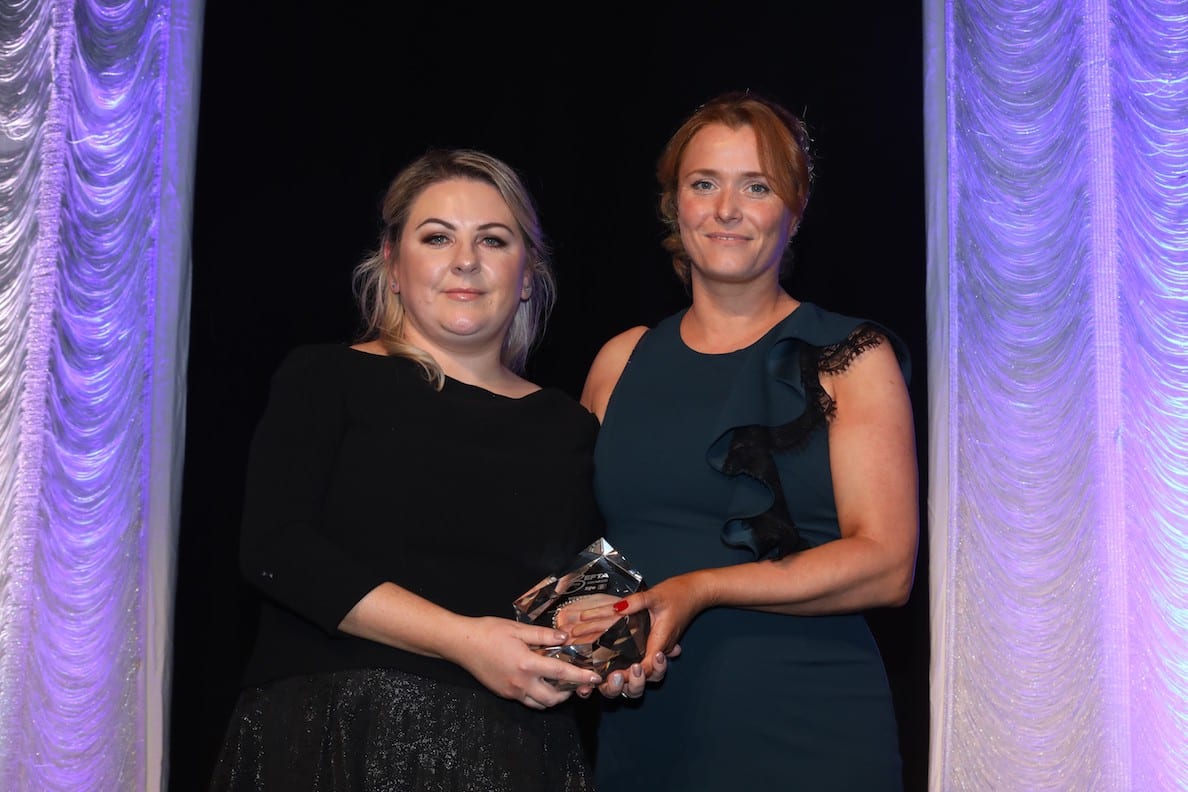 Two Armagh businesses have been recognised at the prestigious BEFTA 18 Business Awards in Belfast.

The awards, now in their 13th year and re-branded from the former UTV Business Eye Awards, were presented at a glittering ceremony attended by a 600-strong business audience at ICC Belfast on Thursday, November 22.

The awards honoured companies and business leaders across 18 different categories, rewarding growth, innovation and commitment to CSR, the environment and people development.

Co Armagh businesses came out on top in two categories; Davison Canners was awarded the coveted Agri Food Innovation Award for their commitment to food innovation over four decades, diversifying to keep ahead of food trends.

Elsewehere, Janine Smalls from Milford based Homecare Independent Living was crowned ‘Executive Support Professional of the Year’ in recognition of her dedication to the company which she first joined in 2005.

Businesswoman Tina McKenzie was named ‘Business Personality of the Year’ for steering the growth of the Staffline Group in the Northern Ireland marketplace, and for her contribution to the local economy as a prolific spokesperson on business issues in her role as NI Policy Chair of the Federation of Small Businesses.

The overall ‘Company of the Year’ accolade went to financial services specialists FinTrU, who also completed a rare double by picking up the award for ‘Fast Growth Business of the Year’.

Multi-award-winning Mash Direct took the ‘Family Business of the Year’ award, while Bangor-based Denroy Plastics was named as ‘Manufacturer of the Year’.

Speaking at the awards, Adrian Moynihan, Head of First Trust Bank said: “The BEFTAs are Northern Ireland’s longest running business awards and are an opportunity to celebrate the stand-out organisations and leaders in our business community, while very importantly recognising the value of their achievements to our economy and wider society.

“Everyone who has been shortlisted and our winners should be very proud of their achievements.

“The event is also an important platform to beat the drum for the Northern Ireland business community and given the uncertain times we live in, politically and economically, we must ensure our voices are heard loud and clear at this critical time.

“Last week we saw a significant and positive step forward in Brexit negotiations with the publication of the draft Withdrawal Agreement and a date set for the EU Summit.

“While maybe not perfect, we agree with the views and position of the leading Northern Ireland business organisations and representative groups who have voiced their support for the draft Agreement.

“It is clear that most business leaders understand and agree that a ‘No Deal’ Brexit could be hugely damaging for our economy and is simply not an option. This deal at last brings some certainty and allows us to turn our attention to the future trade relationship with the EU – safe in the knowledge that we have a transition period to negotiate it and a backstop to fall back on should those negotiations fail.”

Richard Buckley, Editor of Business Eye added: “Business Eye is proud to have been organising Northern Ireland’s foremost business awards for the past 13 years.

“Against a challenging backdrop, it’s really important for business success, by both companies and individuals to be recognised in this way.

“We had a record-breaking entry in 2018 and both the scale and quality of that entry illustrates the strength of the local business sector.”