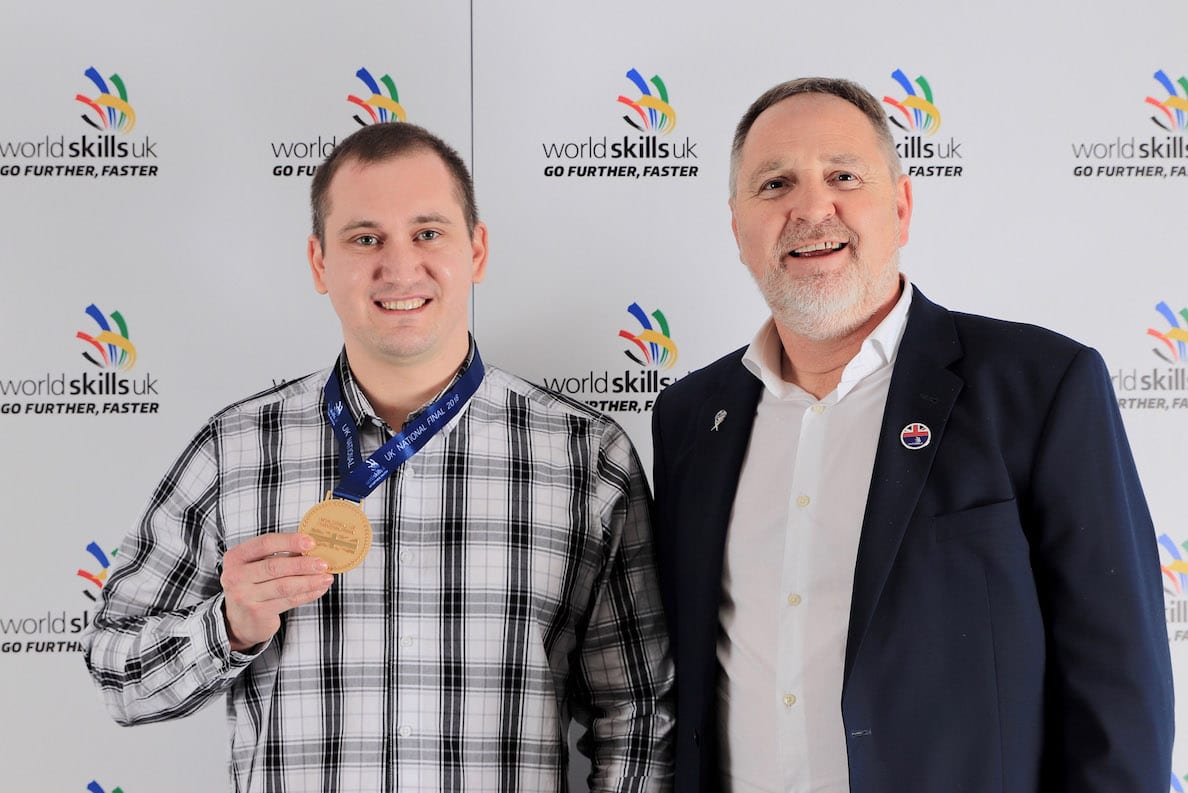 An Armagh butcher, who previously spent nine years as a chef, combined his skills to give rivals the chop as he was named Butchery WorldSkills UK champion.

Saulius Repecka, 30, who works for Emerson’s Supermarket, collected a gold medal at the WorldSkills UK Live Show at the NEC Birmingham where he impressed judges in the final of the prestigious butchery competition.

The Lithuanian national, who moved to Northern Ireland 10 years ago, held off a strong challenge from four other butchers who each completed five tasks over two days in front of a live audience.

The competition focuses on all the essential skills required for a successful career as a multi-skilled butcher within the food manufacturing industry. Butchers are tested for overall skill, innovation, creativity, presentation, work ethic, method and approach to tasks, carcass and primal utilisation, waste and safe and hygienic working practice.

Saulius revealed that the final was only the second time he had competed as a butcher – his debut coming in the Northern Ireland heat of the WorldSkills UK competition this summer.

“It is a big achievement and a big experience,” he said. “When I entered the competition, I thought I may be able to get into the top four because I knew there were butchers with more experienced than me competing and it would be tough.

“Having spent nine years as a chef before becoming a butcher, I have the chef’s touch, which I think helped. As a butcher, you have to know how to cook, present and describe meat. I became a butcher because I wished to know where the different cuts of meat came from.

“I am currently training as a supervisor and manager and hope to go on to a foundation degree in product development.”

The other finalists were Welsh Butcher of the Year Dan Allen-Raftery, 35, from Randall Parker Foods, Llanidloes and Dylan Gillespie, 23, from Clogher Valley Meats, Clogher.

The butchers earned their places in the final after impressing judges at regional heats for England and Wales, Scotland and Northern Ireland.

The butchery competition is organised by award-winning training provider Cambrian Training Company and supported by an Industry Steering Group. Sponsors are the Food and Drink Education Training Council, The Institute of Meat, Hybu Cig Cymru/Meat Promotion Wales, The National Federation of Meat and Food Traders, the Worshipful Company of Butchers and ABP.

Interpretation partner for the Butchery WorldSkills UK competition at The Skills Show is Southern College, Newry. College staff and students attended the Skills Show to demonstrate and promote butchery skills to show visitors.

Chris Jones, head of the food and drink business unit at Cambrian Training Company, said: “The final was an exceptionally close competition between five talented chefs. Every year we see an improvement in skills and the ready to eat products, in particular, were outstanding this year.”

Butchery is one of more than 60 skills featured in this year’s WorldSkills UK Competitions which are proven to help young people go further, faster in their training and careers. The competitions are designed by industry experts and focus on the highest UK and international standards.

They deliver benefits to not only apprentices and students, but also to their employers, training providers and colleges. Taking part in the competitions equips apprentices in industry with the world-class skills needed to help organisations maintain their competitive edge.

“It’s important that butchery is represented as a skill at WorldSkills UK because it’s a real craft that needs to be benchmarked and promoted,” said Katy Godsell, Cambrian Training Company’s marketing manager who co-ordinates the competition. “Its inclusion for the fourth time has been a great tool to raise the industry’s standards and profile.”