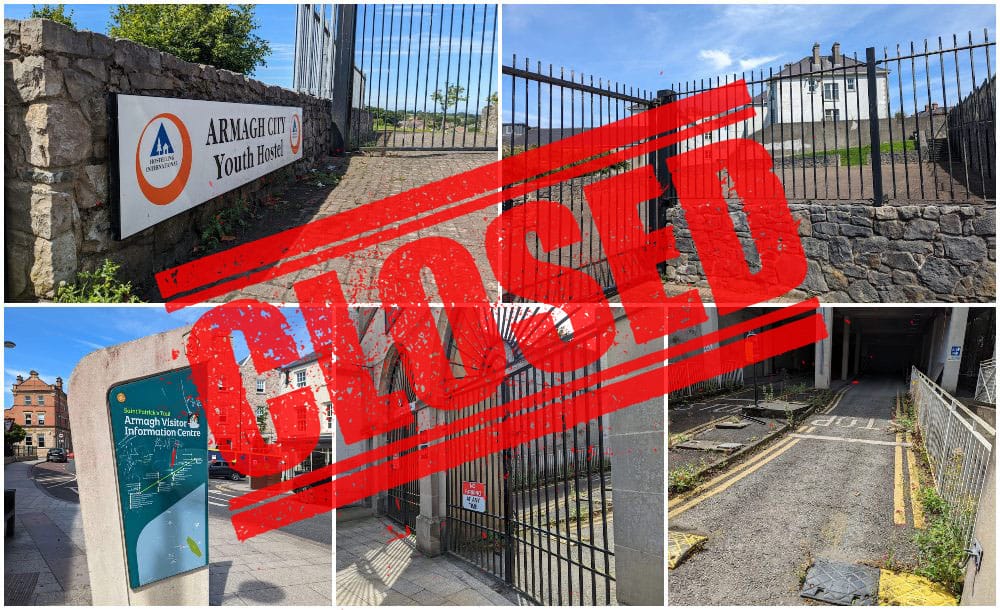 For a city that only a few short months ago harboured ambitions of becoming the 2025 UK Capital of Culture, Armagh should be a flourishing epicentre for tourism.

Armagh City, Banbridge and Craigavon Borough Council continue to place a huge emphasis on hospitality and tourism but the only things flourishing at the visitor information centre on Upper English Street are the weeds.

While there are many positives in the tourism sector across Armagh and the wider borough, the facilities available in the city centre; the cleanliness and bins – or the lack thereof – remains the gripe of many.

The Armagh visitor centre, which was housed inside St Patrick’s Trian, has been closed to the public for a number of years – as too has the 90-spaced car park adjacent to it.

Back in March 2019, Armagh I reported how Council had gone out to tender for the complete refurbishment – at an approximate cost of £1 million – of the car park.

And as far back as February 2015, Armagh I were reporting about plans to transform St Patrick’s Trian into a community hub at a cost of £3.3 million. Neither project has borne any fruit.

The youth hostel, on Abbey Street, was refurbished in 2013, and has proven popular for tourists visiting the area, however, the facility has remained shut since the onset of the pandemic and there are no plans to open it up as a hostel any time soon. Peter Kelly, a disgruntled Armagh ratepayer, penned a letter to the Council at the end of July – which he sent to Armagh I – asking “who is responsible for this lazy, lackadaisical attitude to all things Armagh”.

“I’m writing to you from the Market Place Theatre (MPT) at the closing reception for the John Hewitt Summer School (JHISS),” he wrote in his letter.

“I’ll begin by thanking you for your continuing support for the School, and commending the Theatre on their recent refurbishment and their highly efficient and friendly staff.

“Our city is primarily a cultural centre and a hub for tourism in the 21st century. Up until quite recently we had a tourist office which no longer operates…..more of that later. We have just had our annual influx of students and visitors to the JHISS held on the last week of July for these past twenty years. How did our city perform in this summer of 2022?

“While Armagh exudes a timeless charm, with friendly helpful people in the most part, there are issues for visitors which cannot easily be resolved. Given our poor transport links most of them arrive by car.

“The MPT began life with a car park attached known as the Trian centre, and this also housed a tourist office where helpful advice could be given by really helpful people.

“This facility is now closed, with weeds sprouting within its chained gates. Why close the only city centre car park and then do nothing about it? “The streets were festooned with litter from day one, weeds flourishing on the staircase at Market Street. This and our wet weather combines to create a real hazard to pedestrians.

“Austerity and staff cutbacks seems to be the only show in town and it’s on the rampage. As a long time ratepayer I’d like to know who is responsible for this lazy, lackadaisical attitude to all things Armagh. “This was an opportunity to showcase our city for a few weeks in the summer and with the exception of our flower displays we have been badly let down.

“Somebody is paid to maintain things in our old but lovely city, and I am quite sure they prefer to plead poverty and budget deficit while they padlock another facility, and cut the jobs of our lowest paid workers.

“The ABC supercouncil is a spectator to all of this while they sit on their hands and do nothing. We are missing an opportunity to connect our city with visitors from home and abroad.”

Armagh I put a number of questions to ABC Council, addressing some of the concerns.

In relation to St Patrick’s Trian, which houses the tourism office, a Council spokesperson said: “Works at St Patrick’s Trian have paused due to ongoing discussions with the site contractor to enable an updated design solution. The recommencement of works is anticipated in the forthcoming weeks.”

They added: “Council is investigating various option for the Tourist Office and Trian complex. In this interim
period Tourist Information is available online visitarmagh.com and also through an enhanced service at Armagh County Museum.” In relation to the youth hostel, the spokesperson said: “Council is in the process of assessing potential interim uses for the facility.”

As for the lack of bins; this, as Council suggest, is “historic” and “assessed by need only”.

Armagh I understands that the former Armagh City District Council – while not officially – removed many of the bins across Armagh as a result of the murders of two RUC officers on January 1, 1986.

Michael Williams and James McCandless , were killed on the stroke of midnight by an IRA remotely controlled bomb stuffed into a bin on Thomas Street, close to the turn onto Ogle Street.

While times have changed, bins have remained scarce in Armagh city centre.

A council spokesperson commented: “Due to the historic nature of Armagh City centre, the number of bins installed across the city has historically been assessed by need only, and the position of the bins is determined by a number of additional factors. Council continues to monitor and instal additional street bins assessed by need
only.”

They added: “In recent months Council’s Environment Services Department has been impacted by multiple factors such as; covid, industrial action, and labour shortages. Council has conducted an Environmental Services review and has an Action Plan in place to resolve many of the issues highlighted.”