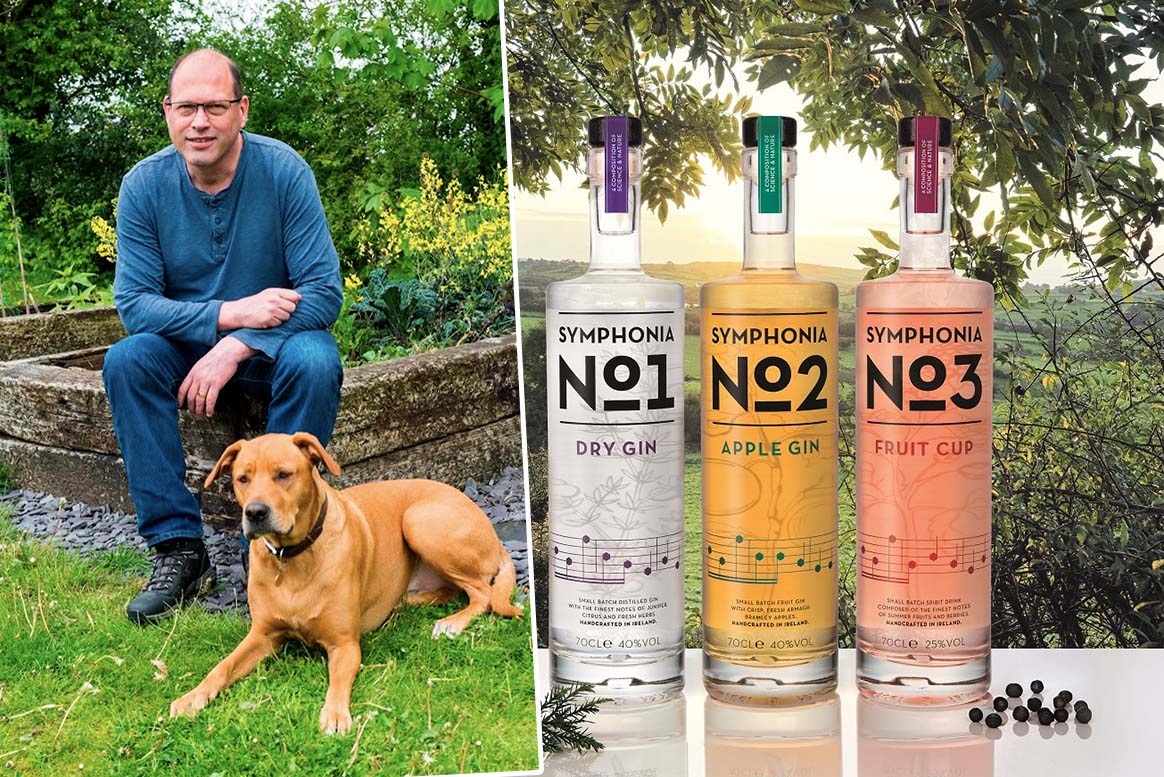 When lockdown struck, and with 80 per cent of his customer base wiped out overnight, local distillery owner Ric Dyer found himself with some extra time on his hands.

Rather than dwell on the negatives, the man behind Symphonia Spirits put his chemical know-how and passion to good use and came up with a new product – Irish Apple Rum.

Two weeks ago, 1,500 bottles went into every Aldi store in Ireland – an order that has been a massive boost to the Moy business.

The drink also won a bronze medal in the prestigious World Rum Awards and was selected as one of the top 10 flavoured rums in the world. It has also won a Bronze in the equally prestigious IWSC awards.

Ric, who has a PhD in organic chemistry, set up Symphonia after leaving his job as vice-president at Craigavon pharmaceutical company Almac.

When he decided to turn his passion for food and drink into a business, he used his knowledge of science to develop the company’s unique products.

Originally from Yorkshire but now living in Benburb, he started out from his garage at home four years ago before expanding last year to Moy Business Park.

Since then, the company has won a clutch of other awards, including the 2019 Irish Gin ‘Champion of Champions’ accolade after beating 37 other distilleries across the country.

Ric’s latest product is the result of  his unique scientific approach and use of local ingredients that makes the company so different to others.

His techniques are not only energy-efficient and sustainable, cutting down on food miles, but they also preserve the flavours and fragrances lost in traditional distillation.

Explaining the background to the apple rum, he said: “I wanted to make something featuring Jonagold apples, the local dessert apples that grow alongside the Bramleys.

“I carried out chemical analysis of all the botanicals that grow around here to see what flavours were in them, and I found this plant that grows in my garden which contains the flavour molecules of nutmeg and cloves, both of  which go really well with apples.

“The next thing was which base alcohol to put it with. I experimented with some white rum I sourced from the Caribbean and it works beautifully.”

Ric is passionate about local produce and the micro-climate we have here, which enables the apples to grow in such abundance, and sharing this knowledge is one of the features of the gin tours, held daily at the company’s Woodlab Distillery.

“I deliberately want whatever we produce to taste of this corner of Ireland. The unique micro climate that we have here because of Lough Neagh, the beautiful peaty soil, the Gulf Stream, the fact it rains every day, means things grow incredibly well. It’s about giving people a taste of Armagh, of the orchard of Ireland.” Ric says people taking part in the tours are invariably “amazed” at the science behind the art of distillation and the unique process used to make their spirits.

“They are expecting to see a big copper stove belching out steam,” he said. “But they come in and we take them to the lab and there are these two pieces of scientific kit sitting on the bench.

“Our process only uses two per cent of the energy of traditional distillation – it is an incredibly sustainable process.

“The distillation industry is one of the industries that really contributes to global warming. The  UK government has calculated that the industry as a whole produces the equivalent carbon dioxide to destroy over 8 million trees a year, and that’s just in the UK.

“The gin industry produces carbon dioxide equivalent to 1.1m trees a year, but if the industry was to use my approach to make gin that would take you down to 20,000 trees.”

Ric is also hoping to open a Gin School within the coming months where visitors can hear the story of how Symphonia products are made, learn how to make their own using flavour notes, take part in practical flavour perception lessons and go home with their own bottle of gin at the end of the day.

He is already planning another new product, inspired by local damsons given to him by a neighbour.

“They are sitting macerating in some alcohol at the moment,” he said. “Towards autumn, I am hoping to bring out an experimental batch – either a damson gin or a damson rum.”

It seems there is no end to the possibilities when you combine science and a passion for nature. You can book tours at www.woodlabdistillery.com