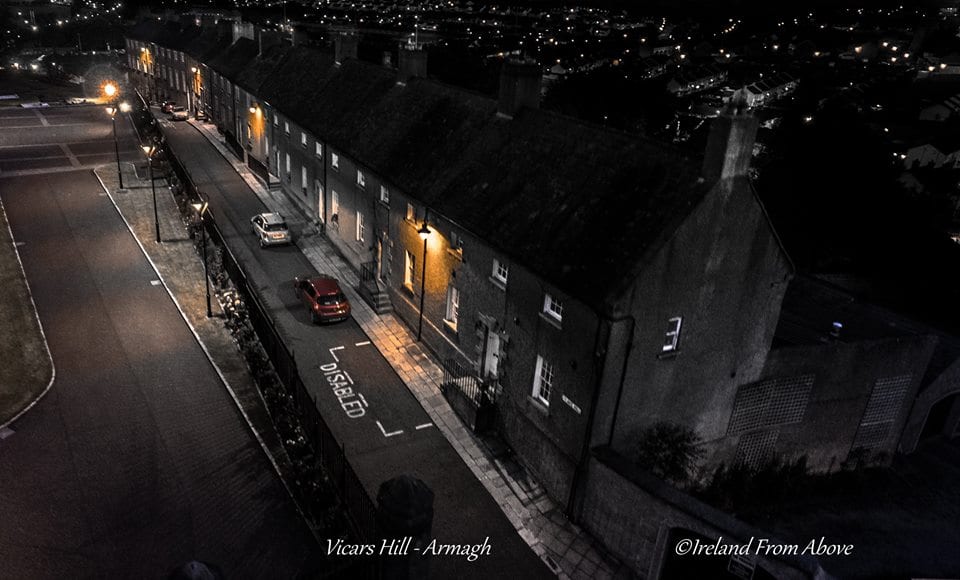 For generations the story of the Green Lady scared the young – and not so young – in Armagh.

And now the true story behind the so-called ‘haunting’ presence is being recorded for all time.

It’s all down to former Armagh man Karl O’Neill, who has just completed writing a stage play based on the Prior family, the most famous – or should we say infamous – residents of the city’s Vicar’s Hill.

The brilliant photograph – taken by Armagh photographer Patrick Hughes, of Ireland from Above – captures perfectly the eerie setting of a tale which unfolded in the same year that Jack the Ripper was stalking the streets of Whitechapel in London.

With its foundation stemming then to 1888, we have a story with all the ingredients of a modern day horror classic!

It is a tale of infanticide, lunacy, murder and ultimately suicide!

And the ‘Green Lady’, of course, was said to have been the incarnation of one Bellina Prior, who lived at Vicar’s Hill with her mother and sister, found guilty of murdering a child, Ann Slavin, left in her care.

The story has now been preserved in a great new drama – ‘The Softening of the Stones’ – written by Karl O’Neill and inspired by his own hearings of the tale during his time in the city.

Karl – now living in Dublin – had previously produced a radio adaptation based on the same story.

But it is now hoped that the work can be brought to the stage as we get to see the actor and writer’s interpretation of the case that shocked Armagh at the time, and one which has reverberated and continued to disgust and intrigue in equal measure ever since.

A decade ago, he was writing the children’s book ‘The Most Beautiful Letter in the World’ for his niece Sheena, for her ninth birthday, which she celebrated on Christmas Day in 2005.

He let Sheena ‘find’ the story inside a red envelope, which had been marked ‘To You’, which he had left beside the Boer War memorial on the White Walk on the Mall that Christmas Eve.

Now the Armachian returns to his native city, but this time the subject matter is far from the stuff of children!

Although it is a subject matter which inspired the Green Lady and, as such, a folkloristic frightfest for the faint-hearted.

If you have never heard of the ‘Green Lady’, the mythical ‘she’ struck fear into the hearts of children across Armagh.

There are bound to be many variations and reworkings of the story – there was a ‘Green Lady’, there was also talk of a ‘White Lady’. She lived at the Folly, she lived in the city centre. It would be hard to find two matching versions of the story and, of course, all this talk of ghosts has to be nonsense! Doesn’t it?

And it is to that source material which Karl O’Neill has turned to preserve a chapter in Armagh’s history which will now, thanks to his work, never be forgotten.

It is a tragic story, a fall from grace from the big house, to a shocking end in a Dublin slum, and one which Armagh I has popularly recounted before.

The Green Lady of Vicar’s Hill – as pictured by Ireland from Above –  in the shadow of St Patrick’s Church of Ireland Cathedral, stems from a macabre murder case 127 years ago!

Twenty-one-year-old Bellina Prior, daughter of the late military commander of Armagh, was charged with the murder of four-year-old Ann Slavin, from Callan Street, in 1888.

Her defence argued that the child had lost her balance on a tin can next to the boiler, and that Prior had “lost her presence of mind at not being able to save the child’s life and falsely accused herself of murder”.

Adele Prior, Bellina’s older sister, stated that her sister and the child had only been alone for 15 minutes when Belina appeared “white as a ghost” and soaking wet, at first saying: “Run down, I did not do it”, later changing her claim to “I have killed the child”.

As the case transpired, other details emerged from the Reverend Benjamin Wade, who was employed as a librarian in the area.

He questioned the accused the afternoon of the tragedy in the parlour of the house.

He told the court that he had asked her “What is it you have done?”. She replied: “I will give you no answer.” He asked her again and she said: “I will not answer a word.” He then pressed her: “Now, don’t you know you have deprived that poor child of its life and what the consequence might be?”

Prior just replied: “Well I am sure I will be hanged and I will be glad of it.”

While being held in prison she attempted to commit suicide by cutting her own throat and was subsequently moved to a lunatic asylum. The jury found her guilty of the murder but declared her insane.

In another version of events from April 1, 1888 – in which the age of the child, spelling of the name and others details change – this is verbatim how Lloyds of London reported:

“Miss Bellina Prior, daughter of the late Colonel Prior, was, on Tuesday, arrested at the residence of her  mother, Vicar’s hill, Armagh, and charged before the magistrates with having drowned Ann Slevin, aged three years. For some time past, it is stated, Miss Prior had shown signs of homicidal mania, and recently  attacked her mother and sister with a hatchet.

“The family hold a good position in the town, and live at a  house called Vicar’s hill. On Tuesday Mrs. Prior went out walking, leaving Miss Prior with her sister Adele,  the only son being away at college. During the day Miss Prior went out and visited Mrs. Slevin, the wife of a  labourer, and asked her to send her little girl Anne, aged three years, up to the house to stay with her.

“Mrs. Slevin consented, and the little girl was taken to Vicar’s hill by an elder sister, and left there. The Misses  Prior provided the child with some sweetmeats. Miss Prior very soon afterwards took the little girl by the  hand and walked with her from the dining-room down to the kitchen. She remained in the kitchen for about  half an hour and then came up alone.

“Her sister wanted to go downstairs, and she asked her not to go,  saying, “I have killed the child.” The sister then went down stairs, and found the child with its head in the boiler of the kitchen range. She took the child out, but it was dead; Mrs. Prior was sent for, and on her arrival Miss  Prior exclaimed, “I did it, mother; I have paid you off and I am glad of it.”

“She added that they had been unkind to her. Her mother asked her how, but she did not reply. A friend of the family, the Reverend  Chancellor Wade, arrived and questioned Miss Prior; but she refused to speak. The inquest was held at  Armagh on Wednesday, when the jury returned verdict of manslaughter against Miss Prior.”

Bellina Prior was held at the lunatic asylum, at first in Armagh and later in Dublin.

Much detail remains sketchy, how or why she was ever released from the asylum. But released she was.

What has been reported is that Bellina and her mother’s lives ended in poverty, in a slum in Dublin. It is widely believed and suggested, yet unconfirmed, that Mrs Prior was responsible for her daughter’s death before ending her own life. Again there will be different versions of how they met their fate.

The legend of the Green Lady, as we began, has been widely retold. There were tales that Bellina’s spirit was captured in a ‘green’ bottle, hence the Green Lady, and she would once again escape if the bottle was broken.

There were stories that the bottle was bricked up in the house at Vicars Hill.

Of course this is all nonsense – even if you believed in such hokum, she died after all in Dublin.

While the origins of the tale are based in fact, of course the entire story is nothing more than an urban legend.

But it served its purpose and generation after generation of kids heard it and believed, scurrying home long before dark to be safely out of harm’s way!

What we now await is to see Karl O’Neill’s retelling of the tale and are grateful to him that the story will, at least, live on…

Image of Vicar’s Hill, with kind permission of Patrick Hughes, Ireland From Above.

Dr John’s partner and family thank everyone for their support

Work well on schedule for restoration of William McCrum grave