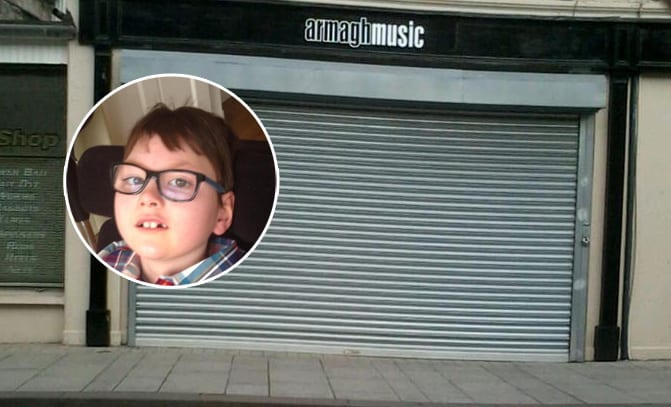 That’s the message, as always, from the international and specially designated Record Store Day, which takes place this Saturday, April 18, having shifted to this side of the pond from the United States eight years ago.

Meanwhile, back in the big smoke, Armagh Music is preparing to mark this special industry day – with a raffle too for a very worthy cause.

The city store is promising a day of live music, special offers and exclusives, as well as some fantastic prizes in a ballot in support of JacksGottaVoice .

The charitable cause was set up by Elaine Weir in support of her eight-year-old son Jack, (pictured), as she craves the chance to give him “his own voice”. Elaine, who also has a gofundme page, explains there: “Jack’s been fortunate enough to get short sessions in school using a Tobii Eyegaze. It’s much like a computer screen but is calibrated to recognise Jack’s vision and eye movements.

“He uses it at school to choose musical instruments to play or to sing ‘Old MacDonald had a Farm’.

“It is amazing to see how accomplished he has become at using it in just a few sessions since October. He can choose which programme he wants to play and navigate in and out of them just using his eyesight.

“With a lot more practice the Eyegaze can be used to allow Jack to communicate by using his eyes to select picture signifiers. I feel very strongly about giving Jack this opportunity to have a voice.

“Therefore I’ve decided to spend this year fundraising to buy an Eyegaze. It costs a lot of money (£12k) so I’ll be working very hard doing a variety it things, from a race night and coffee mornings to a Kilomathon and the Edinburgh Half marathon to raise the money. Join me in giving Jack a Voice.”

It is hoped that as many people as possible will support the raffle and the local independent store as it marks Record Store Day.

Armagh Music will open at 9am this Saturday, with loads of giveaways and freebies throughout the day to RSD customers.

The first 20 people in the queue will get a free tea or coffee, courtesy of Allen’s Coffee Shop, and there will be a free can of Coke Life (while stocks last) with RSD purchases, courtesy of Coca Cola Hellenic.

Customers can also enjoy some great local acts, from 1pm onwards, as they browse.

Keady band, the Freedom 35’s (pictured), made up of Anthony McKee, Gordon Lee, Jimmy Hagan and Aidy Lee, will be performing in store, as will the Bob Dylan-inspired Tony Villiers and the Villains, and Keith Irwin ‘Carbine’. There will be hundreds of exclusive 2015 Record Store Day titles in stock. Among the list, which is by no means exhaustive, are recordings from the Foo Fighters, Mumford & Sons, Metallica, U2, The Who, David Bowie, Dire Straits, The Kinks, Noel Gallagher, The Happy Mondays, Bruce Springsteen, Jimi Hendrix, Madness and much more.

With only two days to go until the biggest celebration of indie record shops of the year, it is hoped events such as these will lure young and old music fans alike out of the house and on to the high street.

Hundreds of towns across the UK are staging free live music events and after-parties to celebrate the culture of their local indie record shops and the vinyl revival.

As more and more fans are discovering the joys of vinyl for the first time, there’s a whole array of outside performances and parties for them to get stuck into, including at Armagh Music.

For a full list of events happening all over the UK, check out the 2015 events page here /events/rsd-2015.aspx

Not only will the performances and parties throughout the day entice youngsters to their local record shops, but this year more than ever before there are a number of titles that are aimed at attracting those first time vinyl buyers.

So make sure and get down to Armagh Music and see all it has to offer – and make sure and buy tickets for the raffle.If you cannot make it, but would like to help the JacksGottaVoice fundraising cause, visit the page:

Sewer works about to start at Barrack Street and Newry Road