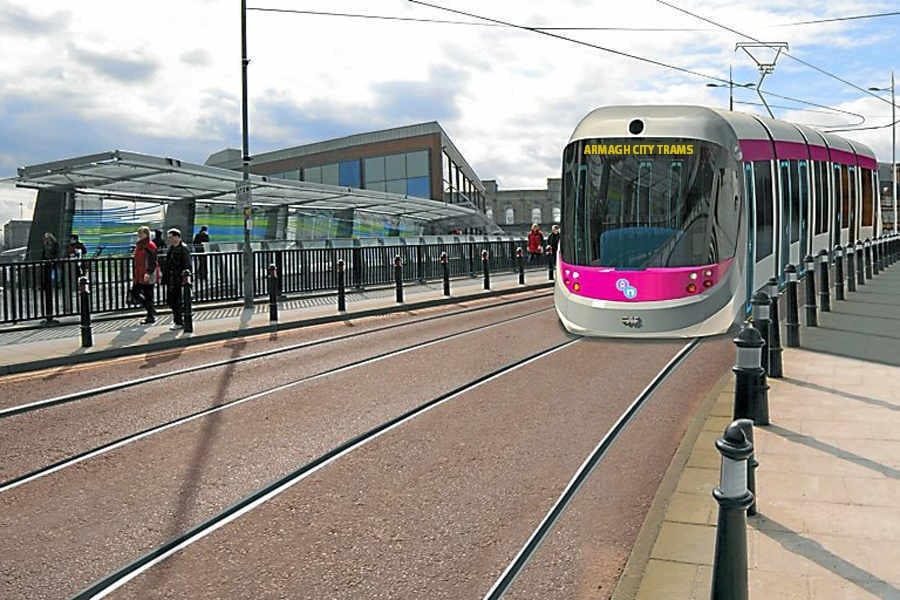 Armagh’s latest and most ambitious bid yet to ease traffic congestion in the city centre is expected to be rubber-stamped this morning (Wednesday).

An inner city tram-way system, which would cost in the region of £3 million to put in place, could be up and running within a year, if all goes according to plan.

The initiative has been kept under wraps for some considerable time now, but Armagh I has been told that detailed design proposals, workings and costings had been drawn up some time ago. Artist impression of the new Tramway system on the Mall

The idea was, essentially, a ‘Plan B’ if no further progress could be made in the construction of Armagh’s long-awaited link roads to allow motorists not travelling directly to the city to bypass the area.

The link roads have been in the pipeline for many years now, but they, like many other key plans and services, have been badly hit by budget cuts being forced down from Stormont.

The reinstatement of the Armagh to Portadown rail line has also been backed by Transport Minister Danny Kennedy, but that was always subject to the money being available.

The new tram-way was also seen as a compromise of sorts to those opposed to the proposed one-way traffic system around the Mall.

That proposal, first revealed by Armagh I, has also been in the background for some years now and those in authority had anticipated opposition.

The new tram-way, it is hoped, would take many of the vehicles away from the Mall area.

The system, for which designs have been drawn up by the Dutch engineering company Floop Rail, would run in the opposite direction to the new proposed one-way flow.

Vehicles, therefore, would travel down along Mall West, past Sainsbury’s – cutting up Russell Street, on to English Street, and down College Street, to rejoin the Mall, before continuing up Mall East, past the County Museum.

The tram system would make use of the right hand lane and move in the opposite direction.

It would be served by a new terminus at Lonsdale Road, to the rear of the current Translink bus station, and the remainder of the Lonsdale Road car park would be set aside for motorists specifically using the new trams.

Motorists, it is expected, will park at Lonsdale Road, and at the other end of the Mall, a bank of parking is to created to the rear of the Gaol to serve a similar function. At that side, the tram will proceed along Barrack Street, as far as the new roundabout which is to be constructed at the bottom of Scotch Street, and back again.

It is hoped that the tram will have dual functions – it will be the first such system anywhere in the Province, and, at the same time, it will allow locals simply to ‘park up’ and travel at ease from one end of the city centre to the other, hopping on and off at leisure, and without having to access the Mall, achieving the goal of reducing traffic in that area.

Bradley Allen, of TransportNI, told Armagh I: “The proposals would go out to full public consultation before being implemented.

“But there seems to be general agreement with roads officials and local councillors that this is the way forward.”

Armagh City and District Council has secretly been working on the plans for a number of years now but, with a scheme of this magnitude, was powerless to make a final decision ahead of the new super-councils.

Its preparatory paper comes under the working title – Armagh Public Rail Infrastructural Links : Forward Investment in Reliable Systems of Transport – and it will now be brought forward for full endorsement.

The new Armagh City, Banbridge and Craigavon Borough Council will consider the plans when it formally takes over today, Wednesday, April 1.