Anti-theft farm scheme to be extended 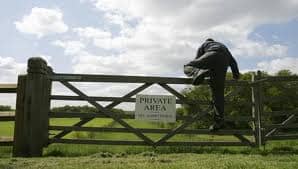 A scheme aimed at providing anti-theft devices for farm machinery is to be extended until the end of the month, according to Co Armagh-based Independent Unionist Councillor Paul Berry.

He said: “I am delighted to learn from DARD and DOJ that they have extended this acheme until the end of February. As one who represents a rural ward in Armagh City & District Council, and as a member of the PCSP in Armagh District, I am only to aware of this area being a ‘hotspot’ for thefts of farm machinery and indeed livestock.

“In many discussions with the local PSNI there is no doubt that organised criminals are behind this dreadful activity and, whilst police have made progress, it is fair to say that more resources are needed to help police locally to try and make more progress at catching these thugs and bringing them before the courts.

“It is good that this subsidy has been extended for anti-theft devices for farmers to apply for but it is not the long term answer to this activity. The fact also remains that the reduction in security along the border areas over the past 15 years has certainly led to the border being an easy route to allow these organised thugs to move and travel a lot easier and cause real torment on the farming community in Armagh District.

“We have no more security checkpoints, very few police roadchecks, police stations closed, like Markethill, Loughgall, Middletown, Caledon and all rural stations, and I have no doubt that a combination of all these factors has increased farm thefts over recent years.

“An area which once had very visual and high security is now under resourced and this matter has to be addressed at the highest level in Government to ensure that the farming and rural community is protected from these criminals.

“I would urge the whole community to remain vigilant and if they notice anything, or persons acting suspiciously, then report it immediately to the PSNI because I know in the past that such contacts with police and the community have proved to be positive in tracking down thugs.”