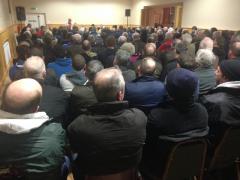 Agriculture Minister Michelle O’Neill has added her own words of condemnation of the bomb pipe attack in south Armagh which left one man in hospital with serious injuries.

She was addressing some 300 farmers at a meeting on CAP reform in Clady last night (Thursday).

“This dreadful bomb attack on a south Armagh man yesterday by an organised criminal gang reinforces the need for all of us in positions of responsibility to act to close down criminal operation in rural areas,” said Minister O’Neill.

The meeting came just hours after the PSNI reopened roads in the Crossmaglen area and confirmed that what was believed to have been the remains of a pipe bomb had been taken away for further examination.

A man sustained serious injuries to hands and body after the explosion, which happened as he attempted to remove a poster from a lamp post.

There was also condemnation from the highest levels at Stormont.

First Minister the Peter Robinson and the Deputy First Minister Martin McGuinness hit out at those behind the booby trap attack which caused serious injuries to Francis McCabe Jr.

The Ministers said: “This was a cowardly and sickening attack on Francis McCabe Jr, and we extend our best wishes to him and hope he has a full and speedy recovery.

“The people behind this are criminals, and a blight on the community. They are attempting to instil fear and intimidate local people who are seeking to live peacefully.

“All right-thinking people across the community should oppose and reject this attack, and anyone with information should bring it to the PSNI to help track down those involved.”