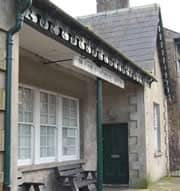 Thirty years after the closure of the old schoolhouse in Milford and the facility has been transformed into a state-of-the-art community hall.

Scores of residents from the village and a number of special guests, including the last school principal, Mrs Jean Acheson, turned out for the official opening ceremony last Wednesday evening.

The former Milford school – which closed its doors in 1983 – has undergone an extensive refurbishment costing £300,000, in order to provide a modern community facility for villagers.

Due to its partial listed status, the exterior of the building has remained the same with its original windows, but an extension has been added and the interior completely gutted.

Built in 1861 by Robert Garmany (RG) McCrum, who was responsible for building the linen village of Milford, it had remained as a school up until witnessing a drop in attendance.

Following the school’s closure, it was taken over and used as a parish hall under the ownership of Aghavilly Parish.

The building was then acquired shortly after the formation of the Milford Community Development Association (MCDA) and used as a community hall in the 1990s.

It became unfit for purpose and the MCDA applied to SOAR for a major grant to renovate the building into a state-of-the-art community facility.

While the bulk of funding was provided by SOAR, other funding contributors were Armagh City and District Council and local business owners, Gerard and Mairead Mackle, who were in attendance at the official opening.

Guests were welcomed by Kevin Powell, chairman of Milford Community Development Association, who gave an outline of the work that had been undertaken.

Particular emphasis was made to the fact the project is not solely for MCDA – it is for the people of Milford.

The opening ceremony included a short sketch of school life, performed by local schoolchildren, and the teacher was Jacky Mitchell, vice-chair of MCDA.

Former school principal, Mrs Jean Acheson, who officially opened the new facility, recalled her time working in the school and spoke of school life in her time.

A portrait of RG McCrum, who built the original building, is kindly on loan from Milford Buildings Preservation Trust and it takes pride of place in the entrance hall of the new community centre.

A year before his death in 1915, RG McCrum built and handed over a recreational hall, which became known as the RG McCrum Institute.

It was always referred to as his parting gift to the people of Milford, so that the building could be used as a recreation hall.

The new facility being provided for the people of Milford has been provided by Milford Community Development Association for the entire community.

Among the guests at the official opening were members of the neighbouring Lislea Community Centre committee. Refreshments were prepared on the evening and served by committee members.